‘Twas a mighty eventful Challenge this year, LDBCers. We started with 98 of you and ended with 577 (578 until some intolerant soul un-liked the page—can you imagine?). We had mentions in The Village Voice and The Onion AV Club, and your humble LDBC Master was interviewed (and voluntarily knocked out of the game) on WNYC’s Soundcheck. We lived, laughed, and loved together—though never in person and never explicitly, so there’s nothing that would hold up in court. And we won or lost based on skill, strategy, and plain-old dumb luck (mostly the latter), supporting and mocking one another in equal measure. And now, after all my procrastination has run its course, we see the results.

I’ll let the numbers speak for themselves. As you’ll note, the win-loss columns don’t add up to 577, and that’s because not everyone reported back with a result. No matter, though; you work with the data you have and the stories behind the figures.

And what stories there were. Gretchen Linder was taken down by Charlotte Church and someone named Joe Clantz, who “gleefully” ran over to point out that it was playing at the office Christmas party. (Sorry, Joe—you’re not an LDBCer, and you’re a heartless fink, to boot, so no bolded font for you.) Libby Frank is married to a man who shrugged her loss off, saying merely, “You realize it’s not actually a real thing, right?” Likewise, Jen Gager has chosen to spend her life with a lout who laughed at her misfortune. Tanya Edwards was struck down while buying ingredients for mojito Jello shots … and I’ll never let her forget it, though I doubt she will anyway. John McPartlin blamed his young daughter for making him go to Boston Market instead of Chipotle, and he was in good company since many an LDBCer was killed off through the actions and choices of unthinking loved ones.

The numbers tell the story of who prevailed and who succumbed, though they don’t convey how people such as Richard Arnold and Chris Smith cursed in front of strangers and acquaintances when they heard the fatal notes. (It’s left to me to do that, so I just did.) They tell the story of who killed off the most LDBCers (the Killer Bs of Bing, Bowie, Bob Seger and Justin Bieber) and the most perilous spots to be (retail stores, followed by home-sweet-home and restaurants). And they tell us … well, I guess that’s pretty much all they have to say.

And this is pretty much all I have to say, too: When you think about it, we’re all winners. Except for, of course, those of us who didn’t actually win. But so we beat on, year after year, and that’ll do it for this one. Thanks, as always, for playing, and we’ll see you in November.

Oh, and this: Puh-rum-pum-pum-pum, people. 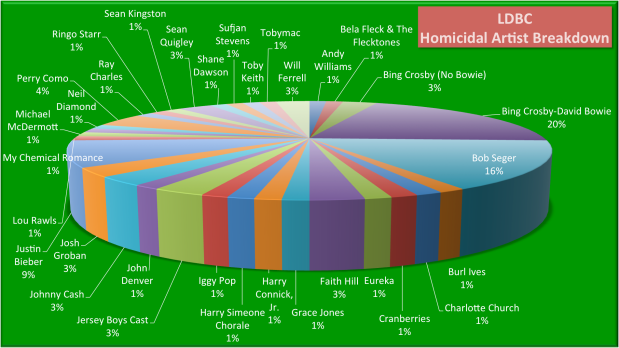 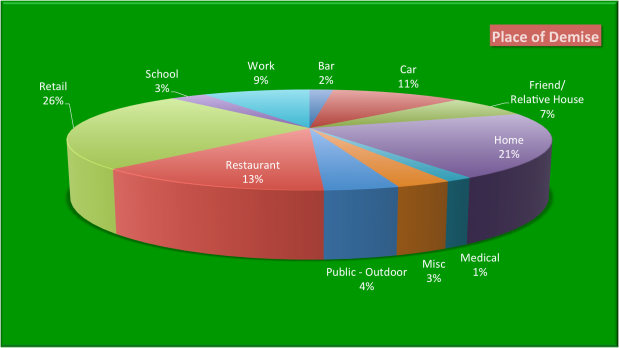 Those Honored, Those Remembered