When the grand epitaph of our civilization is written, it will point out that marketing did us in. Or maybe that’s just the early days of this game. This year.

Anyway, it has. For those who haven’t seen the warnings from LDBCers such as Brother Reuben Radding or Brother Joe Hobaica, this year’s H&M ad from director Wes Anderson features a deadly heapin’ helpin’ of LDB. And unfortunately, a whole bunch of our fellow LDBCers didn’t read the warning in time, as the fatalities from viewing that thing have come in thick and fast already. As have the fatalities in general (119 of them having come in via the form so far).

And speaking of fatalities, we have our First Fallen this year, as I announced on the Facebook page. Poor Mike Misch caught the foreshadowing of LDB exposure on Thanksgiving Day, only to be taken out for real the following morning. You know the drill, all: from here on out this season, our battle cry shall be, “For Mike!” We will survive. The Boy can’t get us all. And as for Mike, he will be much-Misched. We Misch him already, in fact. (Don’t blame me; blame Sister Tracy Scarlato, who first made that joke.) And no, I’m not making fun of the man’s name. Listen, my last name is Peck. You really want to talk about growing up taking shots for your name—first the bird gags, and then the phallic references? Really, people.

Also worth noting: I’m keeping my eye on Brother Hobaica. Sure, he warned us. But then he just happened to recall that he works for the company that produced the Anderson ad. Sort of like one of those Westworld host robots that’s all heroic until it flashes back to doing something awful. I’m not saying I don’t trust Joe. I love him. I’m just watching him for glitching.

(My favorite commentary thus far is from Julia Skochko, who narrowly missed being assassinated by Anderson, but wasn’t actually exposed to it: “[S]ince it was Wes Anderson, I’m just assuming it was played on a hand-carved miniature balalaika festooned with vintage beach stickers from the 1940s, too. Such an undignified way to be taken out.”)

There is no dignified way to be taken out, Ms. Skochko, though some are more undignified than others, it’s true. So exercise complete vigilance. And if you don’t, and you zig when you should have zagged, post an LDBC-elfie to the aforementioned Facebook page and fill out the official reporting form.

Below is the first batch of this year’s LDBC-elfies. Kindly remove your hats before viewing. 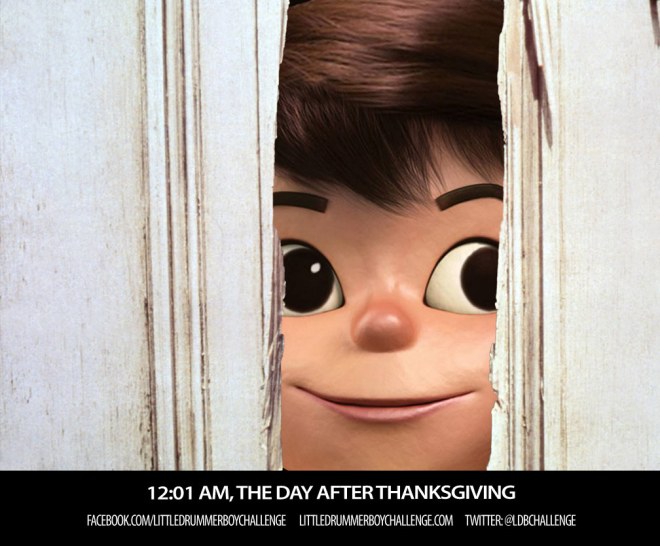 Be quick or be dead, and best of luck to you, friends and loved ones. Should you go down hard, please remember to post on the Facebook page to share your misery and seek comfort (and maybe include an LDBC-elfie of your moment of loss; below is last year’s game-ending gallery to inspire you in your tragedy-capturing). Also, be sure to fill out the official reporting form so that you’ll be duly enshrined on the Wall of the Fallen at the end of the game.

Remember, whoever’s first to get hit and post or fill out the form receives the honor of this year’s First Fallen.

And if you need a quick review of the rules—as well as a handy post for sharing with newcomers—you’ll find that here.

It’s very easy: So long as you don’t hear “The Little Drummer Boy,” you’re a contender. As soon as you hear it on the radio, on TV, in a store, wherever, you’re out. And you record your loss on the official reporting form, then tell us all about it on the Facebook wall, along with the time and place of your demise. END_OF_DOCUMENT_TOKEN_TO_BE_REPLACED